Halloween Howls, It’s Not For Dogs

Halloween Howls, It’s Not For Dogs 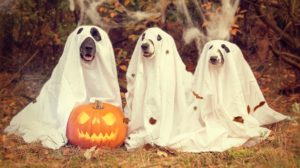 Halloween is a night of tricks, treats, fun and fright, but not for all.  It follows Fourth of July as one of the worst nights for dogs.

Imagine how you would feel having strangers come to your door, on a random night (not Halloween), wearing masks. The thought alone probably creeps you out a bit. This is how our canine companions feel every Halloween.

The average dog usually barks and gets worked-up when the doorbell rings.  “Then on Halloween, you’ve got people coming to the door wearing masks, and carrying swords, and all kinds of crazy stuff,” said Adam Gibson, Owner or Top Dog Professional Training.

Gibson goes on to explain that you take a normally exciting event for dogs, the ringing of the doorbell, but then add to it that the strangers ringing the doorbell have masks and sometimes “weapons” in hand. Then to top it off, “you have it happening repeatedly, “ he said.

Not only do these events affect the average, stable dog a great deal, if your dog is usually of a more nervous state, it all gets compounded on Halloween night.

Eventually the dog is going to hit their breaking point. “They make a run for it the next time the door opens, and not only that but they are going to be next impossible to catch,” Gibson says.

He continues to explain that once the dog is outside they are extremely difficult to catch, as the whole neighborhood looks weird and different to them with Halloween decorations, and strangers walking around in costumes.

Gibson had a few suggestions for dog owners on how to keep their furry family member safe during trick-or-treating hours. “The best thing, that most folks can do for their dogs on Halloween, is put the dog up in a kennel,” Gibson states.

He expounds on this by saying it is even better to have two barriers between your dog and the door going outside.

It is also very important that you do not take your dog outside to go to the bathroom during trick-or-treating hours, even in your back yard.  The scary surroundings, and actions on Halloween can cause your dog to react in ways a pet owner wouldn’t expect. 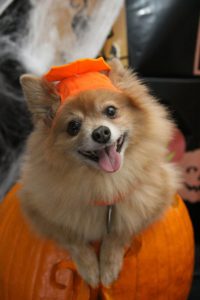 Gibson goes on to say, “ I’ve seen a lot of people, whose dogs have escaped, jumped the back fence,and people never dreamed that their dogs would jump the back fence because they have never attempted it before.”

Kim Peckler, Manager of the Burleson Animal Shelter, echoes the suggestions given by Gibson. “ We would advise that people put their dogs in a safe place, so that all the door traffic does not scare them, and keep them away from fenced areas,” Peckler states.

So keep an extra close eye on your dog over the next few days, and don’t forget to keep them out of the chocolate too!